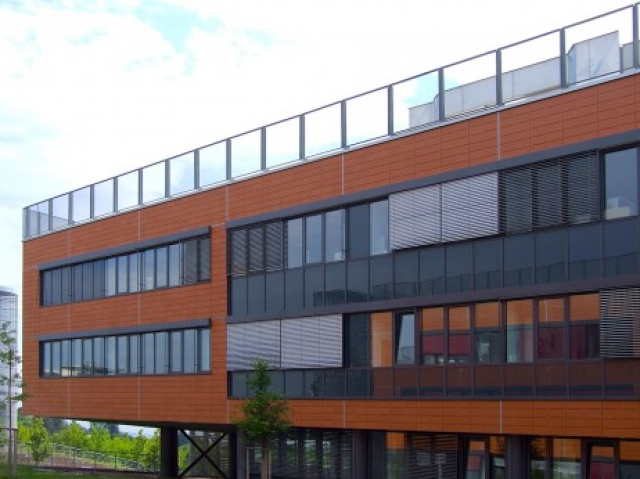 The first stage of a campus of Masaryk University in Brno-Bohunice was carried out in  2005. There are four pavilions called ILBIT – Integrated laboratories of bio-medical technologies, linked through a communication corridor. The project was prepared by A Plus Brno architectural office cooperating with OKF office that processed parts concerning steel structures and building envelopes.

Laboratory pavilions are three-floor buildings with a steel skeleton, reinforced concrete ceilings. In the small part there are peripheral walls made of timber-framed masonry. On the second and third floors and along the roof perimeter there are walled-up spandrels that create horizontal fire separations.

Sipral carried out facade systems and other bellow stated structures. The facade envelope of two upper floors is made of element facade system where individual elements are 2000mm wide. Elements are divided with a mullion in their axes and create the basic meter grid of the facade. In the window part the modules are equipped with opening windows, in the spandrel part these are filled with enamelled glass or aluminum sheet in front of which a ceramic cladding is suspended later. The ceramic cladding is also suspended in front of the thermal insulation on the timber-framed masonry. The glazed parts are shaded with external electrical louvers.

The facade envelope on the ground-floor steps back under the upper floor periphery. For this reason there is a stick facade system used which optically corresponds  with the element system on the upper floors. The external suspended ceiling on the ground-floor is made of cassettes of zinc-coated expended metal.  Along the roof perimeter there are parapet fences filled with expanded metal that partly cover technologies placed on the roof nevertheless do no disturb the building´s appearance with their semi-transparent design.

Individual pavilions are linked with a two-floor corridor, that is partly bracketed from the pavilions and its central part between A2 and A3 buildings is suspended on Macalloy tension rods from the four-column tower. The corridor is enclosed along both sides with a suspended two-floor glazed facade of a stick-system structure. Non-transparent parts of the facade envelope are covered with cassettes made of composite boards with a surface in silver color. The southern glazed facade is equipped with external fixed aluminum shading lamellas.