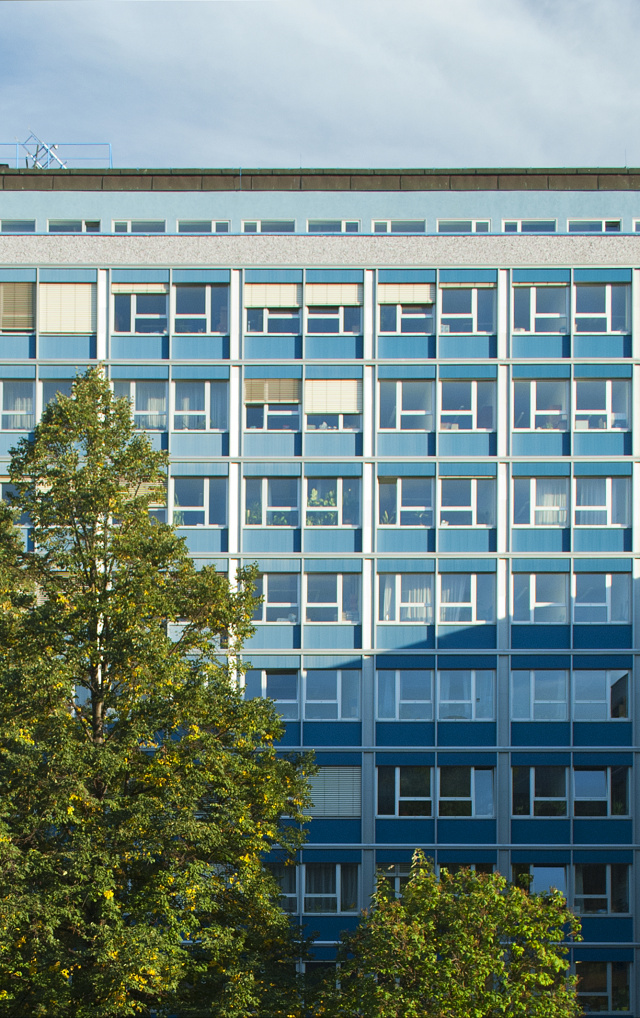 CTU building reconstruction in Prague 6 consisted of two stages. During the first one the parts B1, B2 and the yard part of C2 were reconstructed. The rest -A1, A2, C1, D1 were reconstructed and completion of C2 towards Technická street was done during the second stage.   The aim was to reconstruct the roof, facade, weak and heavy current electric installations and heating system. Apart from the contact warming-up system Sipral also delivered a complete facade. Technical design of the envelope reconstruction was based on requirements of a thermal and technical audit that had been elaborated before the reconstruction began. Principles resulting from this audit had to be met by the structure as well as requirements of thermal and technical regulations. These parameters were later backed up by computations with typical sections of the facade.  The envelope structure on the south-eastern and north-eastern facade is made of floor-high aluminum frames. The frames are embedded in the openings between bearing elements of the current concrete skeleton creating a solid area of the facade. On the gable facades, i.e. north-western and south-eastern side, the facade area is formed by the contact warming-up system, into which the peripheral light envelope elements are inserted individually. Structurally the doors and windows on these facades are made in the same principle, i.e. along the entire height of a floor. Non-transparent ribbons in the place of spandrels and fire separations are made of thermal and insulating panels. Transparent parts of modules are glazed with insulating double-glass. The facade is also formed with set-off exterior elements like exterior horizontal shading louvers placed in pre-set spandrels (the South-western facade) or horizontal shading lamellas (North-western and South-eastern facade of staircases). Opening and tilting windows are embedded in the modules. The current spandrels of the building will be substituted with the new ones so that their construction enabled suspension of electrical distribution and heating bodies.With regards to the fact that the reconstuction took place during the building´s full operation that was only slightly limited, it was necessary to make certain preparatory measures and protect offices´ furnishings to the maximum degree. Before the current facade was removed there had been built so called temporary „skin walls“ at the distance of approx. 1,5m off the facade. The installation took place from the exterior  and complete facade frames (one floor high) prepared in a factory were mounted on so that the building operation was affected the least. The aluminum frames were then anchored onto steel zinc-coated frames made of enclosed steel profiles, water-tight in the exterior and vapor-tight bordered with an aluminum profile in the interior. When water-tight sealing of aluminum frames had been finished the cornices and columns of the concrete skeleton were covered with aluminum corrugated sheets with the same wave height as in the current flashing so conditions of Cultural heritage management were met.