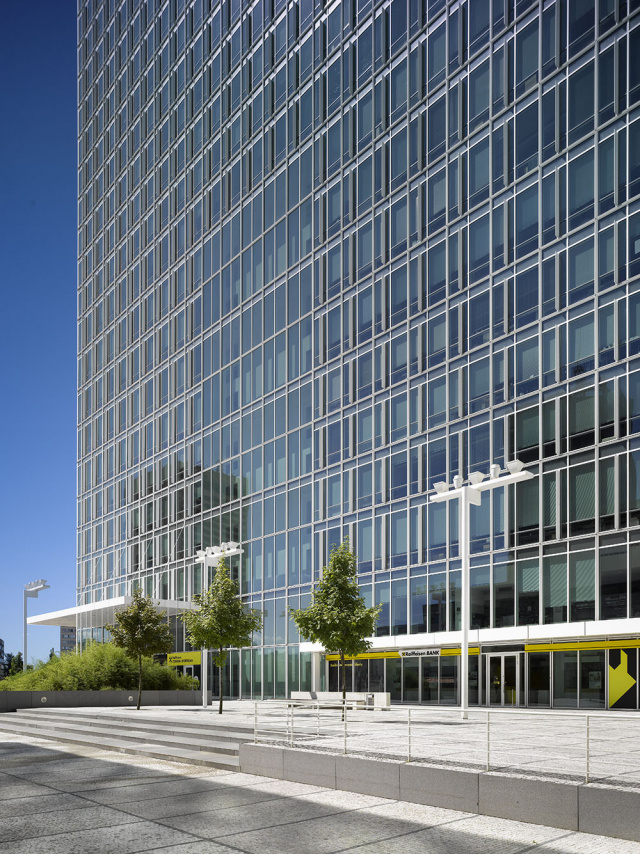 City Tower is the highest building in the Czech Republic so it was a great challenge for us to provide it with atypical envelope within its reconstruction. The main goal was to meet the architect’s specification the investor’s wish and solve the installation together with enlargement and adjustments of the building bearing construction within the administrative building of the former Czech radio. Today there is no doubt that City Tower is one of the most significant dominating features of Prague not only thanks to the height but mainly thanks to the general concept of reconstruction when the abandoned and dilapidating torso was changed in aesthetical and fully functional work. Evidently the unusually planned and executed glass facade played one of the most important roles necessary to reach this goal.Design of the new building of the former Czechoslovakian radio was created in the beginning of the 70’s of the 20th century and the construction started in the 80’s. Nevertheless the velvet revolution brought interruption to the project and it was never finished. In the 90th the construction was included in the City project on Pankrác formed of administrative and commercial buildings.The unfinished project of a high-rise building was taken over by Richard Meier’s architectonic office and made a design to re-create the building that would correspond with the time of its origin aesthetically and at the same time became a modern administrative and commercial center meeting all current requirements, regulations and standards. The whole reconstruction including the facade required a very atypical approach not only from the technological point of view but also the constructional and design ones and many others.City Tower building of 27 floors and 3 underground floors is the highest building in the Czech Republic with its 109 meters. The project of reconstruction can be divided into two stages. During the first one the building layout enlarged to all sides, the bearing construction was strengthened and a new roof construction was built. Basement spaces were enlarged by 35 meters on the eastern and western side and by 25 meters on the southern side. Panels and non-constructional parts of the building were removed so only a bearing skeleton stayed on its place made of steel columns, floor platforms of reinforced concrete and staircase and lift shafts. The first stage was crowned with a facade cladding. The second stage was aimed at the interiors that were adjusted according to wish and needs of future tenants. The envelope of approx. 25 000m2 is formed mainly by glazed facades. Basic element of the whole facade is an original composite aluminum system, designed exclusively for this building. It comes from Hueck Hartmann workshop and it is a system where glass and other panels are inserted. A typical dimension of one module for western and eastern facade is 3000 x 3 750/4 400 mm and for southern and northern facade is 1 875 x 3 750/4 400 mm. A module consists of a peripheral frame, a vertical mullion and horizontal transoms. On the western facade at the place of a ceiling slab the modules have non-transparent panels, so called shadowboxes. In contrast with that there are no shadowboxes on the western facade which makes it, when compared with other element facades, quite a unique project. All modules come from workshop equipped with a pre-prepared device for installation of shading manually controlled horizontal louvers.With regards to the fact that roughly 90% of the envelope’s total area is made of glass and the specification meant extremely demanding conditions of thermal technology it was necessary to find a suitable combination of different methods of glass technological processing so that heat transfer coefficient was the lowest possible. Thanks to unique technical design we finally reached 0,9 W/m2K.  General solution of modular elements is designed so that it was suitable for all relevant standards according to CSN EN 13830 and other standards required by the facade specification. Testing of individual element types was done in Great Britain where prepared elements were checked for water resistance, different values of air pressure inside and outside, wind pressure as well as fall of heavy objects.Since the building bearing steel skeleton has quite high expansion values which can be reached by such a high building as City Tower, the thickness of peripheral joint of individual elements is doubled (i.e. 40 mm) when compared to standard. The joint is sealed with a specially developed and tested three-phase peripheral sealing.To complete the installation successfully it was necessary to solve two key problems resulting directly from the specification. First it was not possible to install the facade from scaffolding which would have meant too difficult realization if we consider how high the building is. Second, since the time conditions of realization speed were quite limiting – installation of the facade on the enlarged steel skeleton was to be done in seven months – the ordering wanted the installation of the facade and expansion of the bearing steel construction to be done at the same time. That is why there was no stationary crane for the facade installation. Area of individual element panels is around 12 m2, and so during installation even the slightest wind could have become a strong rival. So Sipral together with Rostek developed their own system, so called installation railing that enabled safe installation even under moderate wind. The installation railing consists of a pair of railsout of which the vertical one is attached to the facade in anchors prepared in workshop. This rail transports individual modules to necessary height. This rail is continued with the second horizontal – peripheral rail that distributes panels in horizontal direction directly to the place of installation. Height of vertical rail can be adjusted, which enables flexible progress of installation according to growth of the steel skeleton. The horizontal rail is continuously re-mounted upwards as the construction proceeds. The whole system is patented and today is successfully used in projects at home or abroad, for example in Great Britain, during installation of high-rise residential building facades.