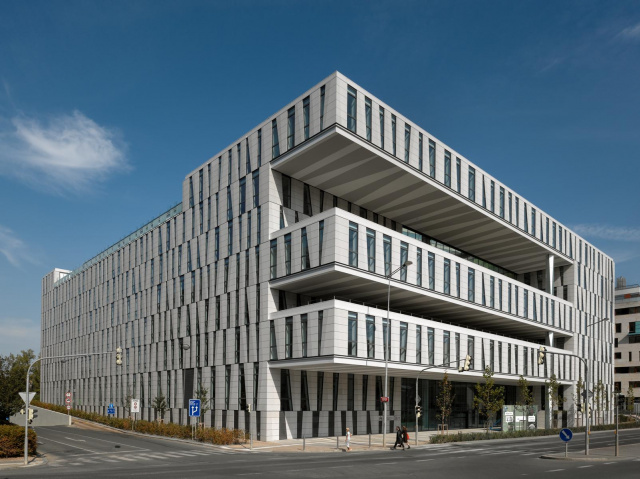 So far Amazon Court is the latest of three administrative buildings on Rohan embankment in Karlín, Prague. It forms part of so called River City project together with Danube House and Nile House. On all three buildings Sipral provided a complete delivery of envelopes except of stone cladding.River City Prague project included plenty of atypical constructions of light envelopes.  For example on Danube House there were used glass ribs as constructional elements for the first time in the Czech Republic. In Nile House the interior facades are solved as element facades and on Amazon Court the most complicated were so called Gable walls, all glazed walls in the building fronts. Amazon Court of seven above-ground and three under-ground floors offers offices and retail spaces and a group of internal and external terraces. The parterre of more than 2 000 m2 is made as public space. Over the atrium there span inner steel truss bridges, in which also a part of office spaces is placed. Sipral’s delivery was divided in 4 basic parts: external windows, interior facades, „Gable Walls“ and shading of the interior atrium.External windows of the building are of irregular trapezoidal shape and made of aluminum – 32 types/shapes in 836 pieces of windows. Each window was filled with 3 pieces of glass sheets of various shapes. Windows were made and glazed in our factory and installed as a whole on site. For the first time such a complex logistics was solved with Sipral’s Trace & Tracking, a new tool enabling full control of production item movement with web interface.Interior facades were made as stick systems, with very subtle T profiles. Single floor-to-floor glass sheets fulfill the function of railing. On transoms in between individual floors there are guidelines of interior shading designed as Japanese walls. There always are 4 vertical strips of shading cloth, one of them is fixed and three are motor-controlled and horizontally sliding. All elements of the Japanese walls were printed with color graphics with a motive of Amazonian fern and when drawn they create a complete image. Each of parts is unique.  There are Gable walls placed in between bodies of external bridges on northern and southern fronts of the building. These are 5 individual facades that are suspended on flexible constructions of bridges. Since the bridges can sag independently according to their current use the bottom and top details of facades had to be designed in such a way to absorb these movements. This was found out by using kinetic elements connected through springs. The glass units themselves are supported only in horizontal joints, the vertical joints are sealed.Amazon Court won the international competition Building of future of MIPIM Architectural Review 2008 in Cannes in the category of office buildings. Amazon Court also won the Best of Realty 2010 competition in the category of new administrative centers, in Construction & Investment Journal Awards competition in the category „The best office development“ awarded by Construction Investment Journal. These prestigious awards were granted for a unique architectonic concept but mainly for application of energy-saving technologies and materials leading to sustainable development. Last but not least Amazon Court is the first Czech project being granted DGNB golden certificate, the highest value of international certificate system of German council for sustainable buildings.