Louis Vuitton Foundation is a unique architectonic, constructional and cultural feat located in the very heart of Paris on the border of Bois de Boulogne. The project is aimed for exhibitions as well as creation of background for contemporary artists and space for their realization. 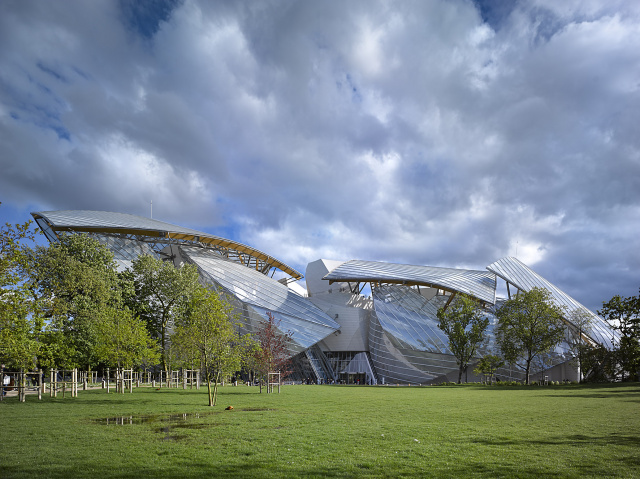 The first idea about a Foundation and proposal of cooperation in the project came to life in 2001 when Frank Gehry met Mr. Bernard Arnault, the director of LVMH (Louis Vuitton Moët Henessy). In August 2007 the project got a building permission, in March 2008 foundation works commenced and in September 2009 started works on a bearing structure of the building. The last stone claddings were mounted in December 2013, in February 2014 the building was handed over to the investor, in course of spring 2014 landscaping was done as well as interiors and it was opened for the public 27th October 2014. The basic 2,6m thick slab is formed by 11000 m3 of concrete and 1900t of steel. The primary concrete and steel structure supports white walls of icebergs that mingle with glazed facades and together they create a water-proof envelope of the building. The whole building surrounded by an artificially created channel is covered by 12 glazed sails which are designed by the architect to evoke sails of a yacht stretched by wind. Sipral took part in this project by delivering glazed facades of various geometric complexity. 42 external structures include all-glazed facades, a skylight, entrance systems and revolving doors, emergency exits, fire systems like openings for heat and smoke exhaust, fire-resistant structures, structures with high sound insulation and structures resistant against forced entry. Other two structures are placed in the interior, a glazed distorted facade separates a café from a lobby space and 17 special curved glass units increase acoustic conformity of the forum. 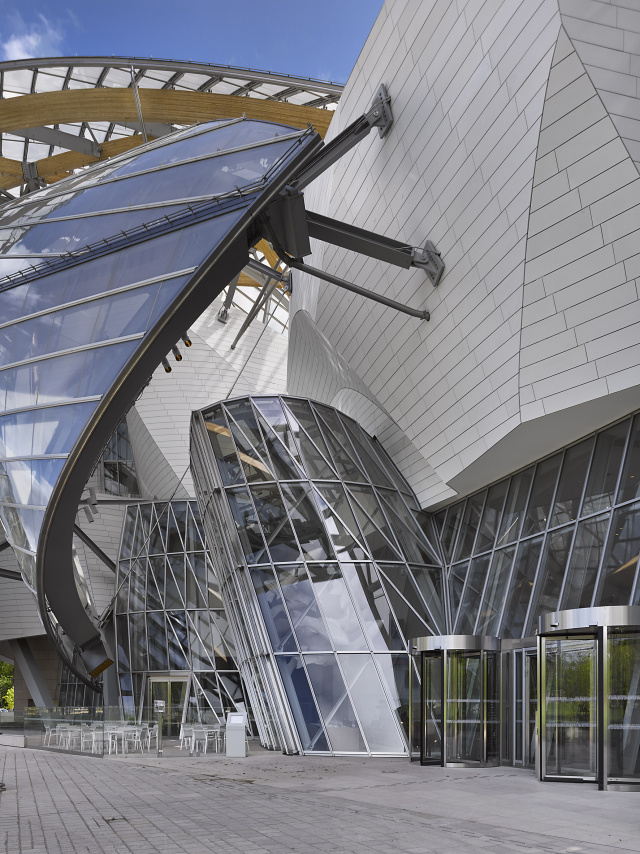 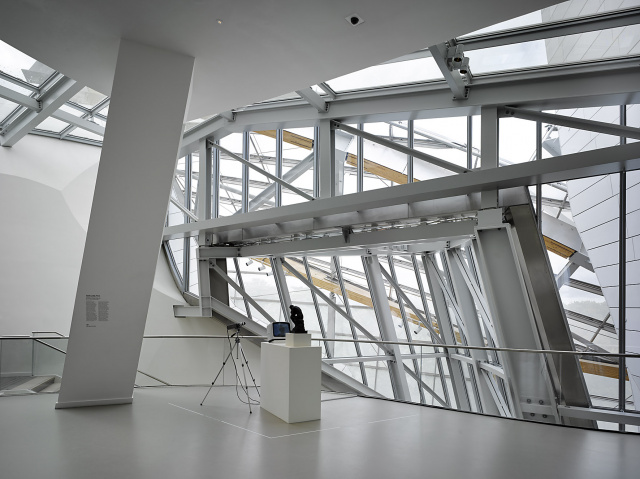 Glazed facades grow through white cladding of the icebergs and create a water-proof envelope of the building. So called planning of installation works in 4D played an important role together with 3D designing. Thanks to precisely set up time sequence of each mounted element and mutual cooperation and respect of all suppliers the whole structure looks technically natural and all its parts play the role they are aimed for. There were two custom-made facade systems developed for the Louis Vuitton Foundation project – mullion-transom type made of aluminium profiles. One for facades with planar geometry and one for facades of complex shape.

With regards to the fact that both systems are new and unconventional they needed to get a special technical approval by French authorities, a so called ATEx. During the project development there were several tests done from different technical areas to check functionality of facade systems and also for the purposes of ATEx procedure.

In a specialized lab in Germany there were impact safety tests, test of water-tightness and air-tightness of large vertical and horizontal facade mock-ups carried out. In Klokner´s institute, Prague there were several sets of structural tests executed. In other labs surface treatments and material aging were tested. Czech professionals also provided for example tests of resistance against forced entry for doors. Some of the facades have fire resistance prescribed or high level noise attenuation so there were also fire and acoustic tests organized in French testing laboratories.

Some of the tests were done right on the site. These enabled us to verify right function of water drainage from facade systems, quality of installation works and resulting parameters of our glazed structures.  Proposals of technological solutions of individual facade types and results of all tests were finally presented to the Investor´s technical supervision representatives and facade experts working of insurance companies. These could see that final design and facade properties are in conformity with requirements.

You may find a special episode about the Foundation with Adam Gebrian from October 2019 (with English subtitles) on the web site of Překvapivé stavby (Surprising Buildings) series of the Mall.TV internet television.

Hoffmeister, Germany
The area of 9000m2 is enveloped by 1700 unique aluminium panels clad with more than 19000 white Ductal slabs.

Sipral, Czech Republic
44 glazed structures are composed of Schuco custom-made facade system of aluminium columns, transoms and 70mm wide T-shaped diagonals. In complex shapes these are interconnected with so called nodes enabling change of the facade geometry. The stick-system facade is glazed with double-glazed insulating units filled with argon. They have various shapes and compositions (25 types) caused by high demands on acoustics, thermal shocks, statics, fire resistance, safety and resistance against forced entry. Roof glass units are equipped with silk-screen. Fire-resistant structures (EI60) are composed of steel thin-wall profiles by Jansen. All facade types including opening panels (doors, heat and smoke exhausts) were submitted to many tests in European laboratories and the site itself to meet European and French standards and also high demand of a facade expert delegated by the insurance company. It was necessary to obtain a so called ATEx (a technical assessment of an experimental design) to be able to use an innovative facade system on the French market.

DT Mostárna, Czech Republic
Supplier of the secondary steel structure that serves as a bearing structure for the tertiary structures of glazed facades. Sipral´s sub-supplier.