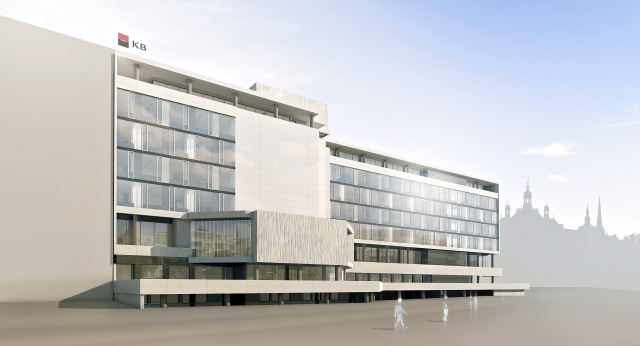 The general reconstruction of KB building in the center of Plzeň was done by Trigema Building a.s., a construction company. The current glazed facades were removed, including the set-off massive solar-control grilles and the facade cladding on the whole building as well as parts of roof structures. The glazed facades were redone as a smooth all-glazed external cladding set off the bearing structure of ceilings. Full facades of the building were warmed up and equipped with suspended facade cladding. We also provided water-tight and thermally insulating structures of roofs and other external structures as surface of supporting pillars, external open suspended ceilings and balcony surfaces. As a part of construction there were also new grille shutters and a garage gate on the building basement delivered. The glazed facade was shifted ahead of the face of the ceiling structure and in relation to that there were new internal spandrels and new connections of interior partitions done. 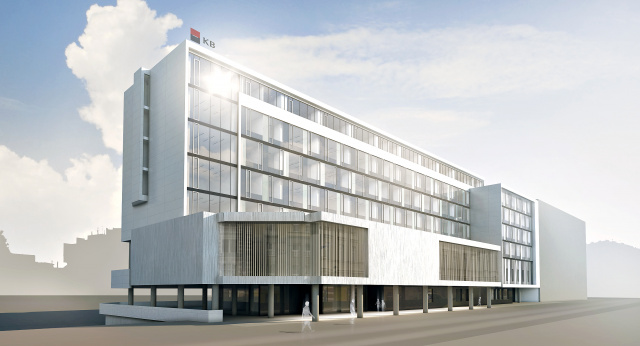 The construction was executed in stages while the building operation was not interrupted. Time, technical, operational and safety issues related to temporary operation of the building during the construction formed an important part of the construction process. Demands on time advancement of works and distribution in individual stages were detailed on the basis of documents from the general contractor that issued the schedule of planned works continuously to be approved by the investor, especially with regards to provide access to the spaces with a special regime.
Sipral took part in this project with a complex design and supply of all glazed facades of the building, including removal of the original ones. New glazed facades are made predominantly as element facades. These are mainly the facades on the principal mass of the building made as smooth, system, consisting of aluminum system profiles, in a thermal and insulating standard fully meeting thermal and technical requirements of CSN. RAL metallic powder varnish was chosen as a surface treatment.

Glazed facades consisting of combination of transparent parts and non-transparent filling panels are suspended ahead of external face of a ceiling board. The transparent parts of glazing are equipped with opening system windows with a hidden frame and fitting that meets requirement of increased level of safety against break-in. Windows are equipped with a magnet for connection of fan-coil regulation and EZS connection.

Non-transparent panels are warmed-up and their glazing is done in two variants. In one part of the facade there is the same double glass as in the transparent parts but with a tempered dark glass on the back position of the insulating double glass.  The second part is glazed with a single tempered glass of Planibel clear type with a print of RAL 9018 color. Outline of the opening parts is highlighted by setting the frame made of RAL 9010 atypical profiles off the facade plane.
A part of glazed facades of the building, facades on the 6th floor, 2nd floor (in the bank hall) and on the ground-floor is made as a stick-system facade of the same parameters and quality as an element facade. In the stick-system facades on the 6th floor there are windows with hidden fitting as in the element facades. The facades on the 2nd floor and the ground-floor do not have opening parts but only large-scale glass units. Ground-floor entrances are made of two automatic sliding doors.

There is a maintenance system installed on the building. It consists of a permanently pre-suspended rail track (ROSTEK system) for facade washing from a cradle or for cable attachment in case of maintenance done by a climbing technique.