The Flow Building project is situated in the very centre of Prague, on the corner of Opletalova Street. The seven-storey building from Chapman Taylor offers almost 15,000 m2 of office space and 7,000 m2 of commercial space including two underground garage floors. Sipral supplied the complete building envelope for the project – unitised and stick-system façade from traditional materials (glass, aluminium) is complemented by a Spiš travertine stone lining which respects the architectural character of the surrounding buildings. 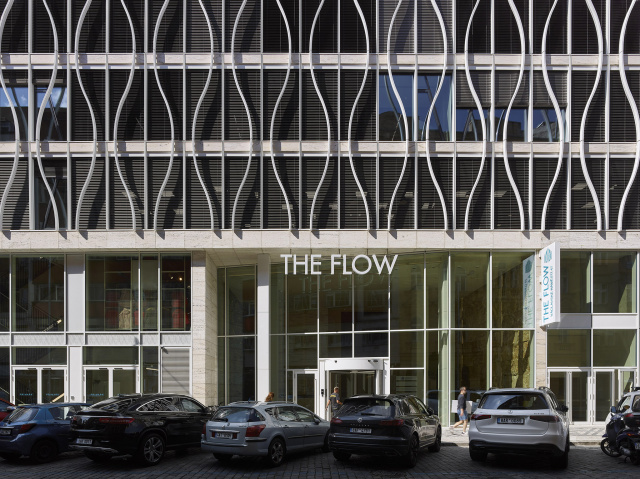 The plot with the original building from 1880 has been owned by Flow East development company since 1994. Based on expert opinions, the building was demolished in 2017 and a new building was risined on its original ground plan extended to comprise the adjacent vacant lot and former inner courtyard. The architects, Chapman Taylor, wanted to revitalise the centre of Prague with their design. They therefore created a building that respects the surrounding historical development while simultaneously introducing 21st century design. The project benefits from state-of-the-art technical solutions – it uses passive methods to reduce the tenants’ power consumption, for instance. The offices thus offer large flexible space with plenty of daylight complemented by an intelligent and energy efficient LED lighting system integrated into various elements of the building, including the modern façade by Sipral. The unique building envelope extends above the sidewalk line to the higher floors. The unique curvature of the articulate surface of the façade has been achieved with a three-dimensional unitised system with special character thanks to Spiš travertine. This natural stone is a typical building material and can be seen on a number of buildings on the square (including the Jalta Hotel and Fashion House). The overall appearance of the façade is complemented by centrally controlled outside louvres and opening windows with triple glazing which ensure optimal environment in the interiors. Furthermore, the double façade on the building corner reduces both solar thermal gain and noise. The complex shape of the building envelope was feasible only with the use of 3D project modeling. Thanks to the use of passive methods for reduction of tenants’ energy consumption and CO2 emissions, the project received the Outstanding certificate, the international sustainability assessment of BREEAM buildings. The project also won an award in the "Best of the Best Office Development" category in the "CIJ Hall of Fame".