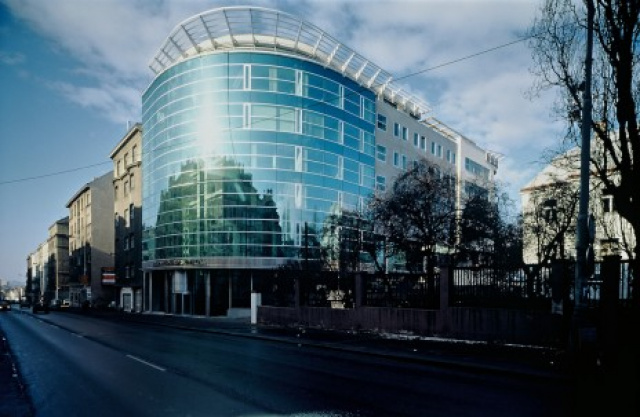 For this structure, built in 1997 in the Prague district of Zizkov, near the busy Ohrada intersection, Sipral supplied glazed aluminium structures made using the Schüco system. Predominantly, they are faced with green reflexive glass Stopsol Supersilver Green made by Glaverbel. The stone cladding of the eastern and southern facade, the shading canopies, the automatic sliding doors and the glass interior partitions (some of which are fire-rated) were also a part of the supply.The building’s designer put the greatest aesthetic stress on its south-eastern corner, consisting of a semi-structural arched glass facade leading onto an earlier block of flats. On the southern side, the facade is anchored to a steel truss structure. Set on the seventh floor is a sizeable aluminium canopy in a peaked shape, made of massive aluminium lamellas of streamlined contours. The outer cladding walls are set with aluminium windows also made with the Schüco system RS 65. On the eastern side, the windows are mounted into the outer face of the stone cladding. The public entrance consists of an automatic revolving door set into the arched glass facade. Sipral also supplied exterior glazed structures made by the ABS system with a required fire-rating.