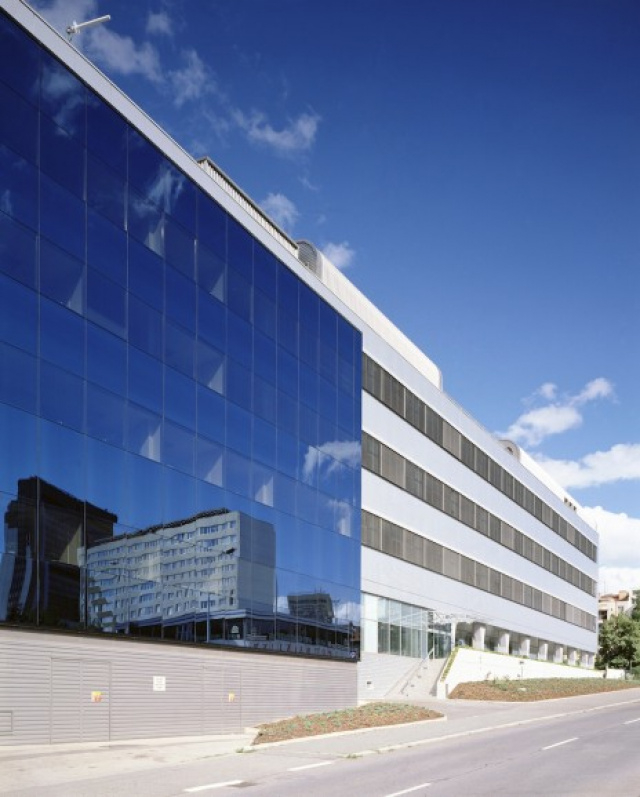 Sipral’s delivery for this order was particularly extensive: all glazed structures, the external and roof cladding, the column cladding, the suspended exterior ceiling, and the automatic shutters on western facade.The structure is divided into building A and building B. Building A is clad with a Schüco FW 50 SG structural facade and glazed with Luxguard CR 20 glass, intended to reflect the surrounding buildings. Its continuous reflective blue surface provides visual contrast to the technical impression of the silver-grey facade and roof of building B. On the eastern and western sides of building B, the colour of the ribbon windows across four floors is purposely one hue darker than facade cladding, and in combination with the eloxal surface of the opening flaps adds balance to the composition of the entire building. These windows use the Schüco Royal S 70 system and face the street, i.e. western side. In addition, they are equipped with electric-driven external shutters, which shade the offices on this side against the afternoon sun. When the shutters are drawn (controlled individually in each room), the facade is re-sectioned and the high-tech effect of this facade part increased.The glazed wall of the arcade was created with the FW 50 system using sealed vertical joints. Columns in the arcade are clad with eloxal aluminium sheets and a rising corrugated metal sheet widening conically towards the capital. Selection of such a visually textured material serves to underscore the effect of the glazed arcade, and likewise delineate the ground-floor from the optically smooth remainder of the building.The roof cladding was designed as a sandwich of a load-bearing trapezoidal sheet of insulation below and an exposed elevational trapezoidal sheet above. It was necessary to pre-bend these sheets in advance with the Softline technique to achieve the striking arcs of the roofline. Running symmetrically along the roof axis is a skylight strip with two prominent towers made by the Schüco SK 60 system, atop a steel support structure. Together with the roof cladding, rain-gutters and climbing shackles (to assist in facade cleaning) were also installed. The windows on the eastern side of the building are made with the Schüco Royal S 50 system, and are embedded in the trapezoidal sheet. They are equipped with a raised aluminium sheet, which grants them an interesting oval shape and complements the view of the building from the east.In addition, the glazed inner partitions using the Royal S 50 N, Royal S 65, FW 50 and FW 50 S systems formed a part of Sipral’s contract. These are located on the ground, third, and the top floors, where they continue the glazed line formed by the skylight, and they enclose the atrium with its wall cladding of Alucobond slabs. In the final stage of construction, hand-installed interior louvers were mounted on the partitions and all the windows.