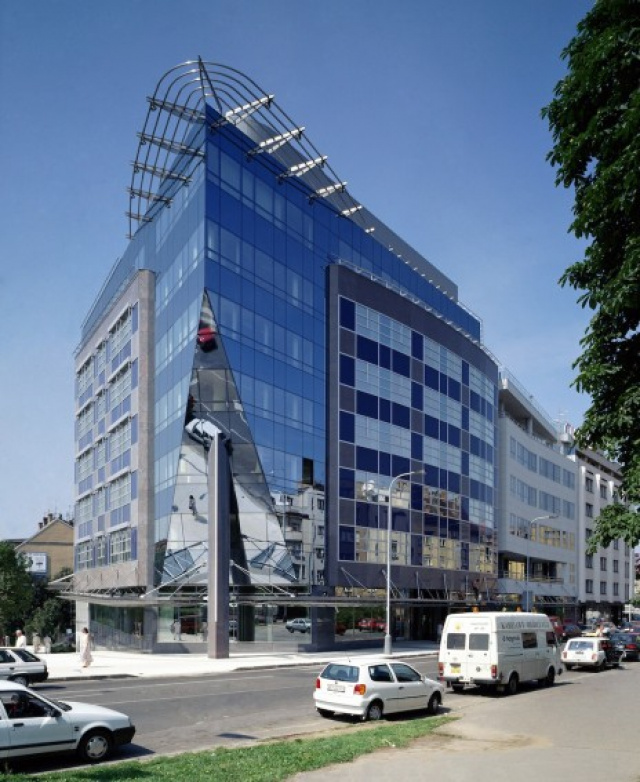 In the first half of the year 1997, Sipral realised the complete supply of external cladding for the new branch of Ceskoslovenska obchodni banka (Czechoslovak Trade Bank) in the Prague district of Pankrac.The eastern part of the building is divided into two complexes: the first has a grid facade with stone points alternating with glass, while the second flat part has window strips set into the face of with stone cladding. For both variants of aluminium structures, the Schüco CW 80 system was used. There are interesting canopies in the structure’s parterre. The most conspicuous, and technically most interesting element, on the structure is the design of its corner facing to the square. For its distinctive shape and character – the intersection of three planes – the architect chose a system for structural facades, Fenster Werner. Addressing the structural requirements of this corner is the reinforced iron column, clad with stone, passing through the facade. Here, Infrastop Blau glass was used for the first time in the Czech Republic, a material with excellent thermal and physical parameters. The facade is completed by a steel pergola, which serves for lighting and cleaning.The entire western facade is characterised by a combination of white stone cladding with individual windows. A semi-structural staircase facade passes through the centre of the western facade, then unrolls into two side flights. Also used for its glazing was Infrastop Blau glass. The whole upper floor, containing the technical and operational equipment of the structure, is clad with Alucobond boards. An interesting architectonic and technical element are the ellipsoidal windows.