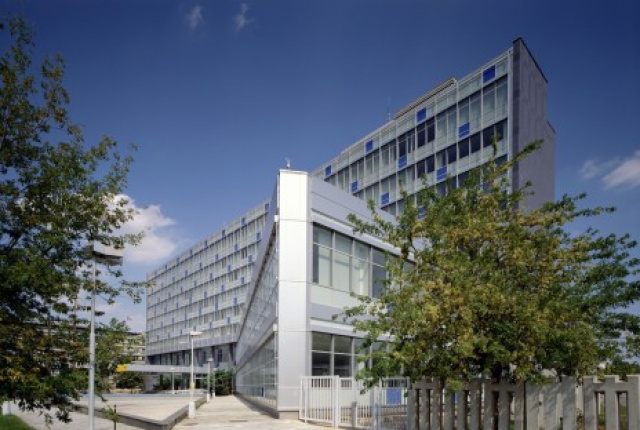 Constructed from 1972 to 1979, the Central Telecommunication Building represented at the time of completion a truly unique structural as well as architectural accomplishment, considering its size and complexity. Its characteristic radio-transmission tower soon became an important landmark on border of two Prague districts – Vinohrady and Zizkov, where it stands between the Zizkov Freight Depot and the Olsany cemeteries The nine-floor complex consists of three structures: -The largest, eastern one containing the above-mentioned tower; -The western block with administrative space (the registered office of Telecom, a. s.), as well as the main entrance and the employees’ canteen; -The connecting link between both objects. For the original cladding of most of the exterior surface, including the tower, a specially developed metal-plastic module cladding was used, based on aluminium ellox profiles and glass fillings (Zukov Praha). Only on two gable facades of the western object did there appear a dry stone cladding of natural travertine anchored on a steel cladding module. After twenty years, defects in this material began to make themselves felt: leakage and insufficient heat-technical parameters, as well as the less significant matters of changes in de-thermal window glass colour and the appearance of mottled blotches on the travertine claddings of gable facades. Considering all these defects, Telecom, a. s. – the company owner – decided to re-construct the facade cladding, and in particular, that of the most exposed western object with the main entrance into the entire complex. Sipral was made responsible for the complete cladding re-construction of the western building. In many aspects, the entire order was unique: the size of facade area chosen for complete replacement – 5500 m2 – ranks the facade among the largest ones to be entirely rebuilt after 1990. Also involving special difficulties and hindrances was the process of replacement – as it was to occur during uninterrupted operations inside the building. Hence, the replacement procedure could not be carried out in strips (along the entire floor height) as is usual, but always along the height of two floors covering the total facade area in sequence. A requirement specified by the owner, this procedure demanded higher requirements of the entire order preparation, logistics and installation. A grid system - Schüco FW 50 - is used on the facade facing westwards. Its system is a “mullion-transom“ one with a single profile elevational width (50 mm – compared with the original facade with profiles of 90–130 mm) and entirely fixed clear glazing. The opaque section of the spandrel and head jamb strips consists of a thermally-insulating panel: white enamelled exterior glass regularly alternating with blue glazing. Other facade areas are glazed with clear double-glass. Vertical silver safety guardrails serve as an aesthetic complement to the facade, granting it depth and texture; likewise, they serve as support for a maintenance trolley when the facade is being cleaned. Inside this grid of unobtrusive vertical bars is the network of yet more subtle lines formed by the horizontal aluminium exterior louvers (by the firm Krulland), controlled by a central operating system reacting to light intensity and wind force. If the facade is subjected to excessive light, the louvers automatically shade the inner spaces; if a certain wind force is exceeded, they are automatically drawn back to their boxes to prevent damage. In light of its size, the western facade had to be divided into two fire sections separated with an anti-fire barrier. Passing through the entire facade in a width of one field (1200 mm) approximately at the location of the works canteen, it is constructed according to the Hartmann system using a glazing of multi-layer fire-rated glass. The local change of grid and glazing type is not visually apparent. According to current fire regulations, it was necessary to add horizontal fire-rated strips (900 mm high) to prevent the spread of fire from one floor to another. For this structure, special Thermax fire-rated boards were used, fixed to a steel spandrel structure. All non-glazed parts on the western facade are made of aluminium sandwich boards (Alucobond) and are of the same colour as the aluminium profiles of the grid facade. Alucobond boards were also used for the entire cladding of the striking canopy above the main entrance. Sipral also supplied the glass automatic door for the main entrance. The same glazing system (including the colour pattern) as on the western facade was likewise assumed for the two eastern facades facing the connecting link. Considering the fact that they receive less solar illumination than the western facade and are less visually exposed, no louvers were used, merely special glass units with a higher light impenetrability.The gable facades are designed in an entirely different manner than the western and eastern facades: as pre-suspended ventilated facades with surface warming. The original travertine cladding was replaced by a cladding of dark grey-blue ceramic boards (Mirage - 60x60 cm) with alternating matte and glossy surfaces. The glossy surfaces create a rectangular web on the facade, with a single matte surface located at their intersection, causing the facade appearance to change depending on time and light conditions. The ceramic slabs are held in a systematized aluminium grid fixed with exposed hooks. The same materials and colours were used on the column cladding on the ground-floor and 1st floor of the western facade (the part facing the street Olsanska), creating a necessary visual counterpoint to the light grid facade.