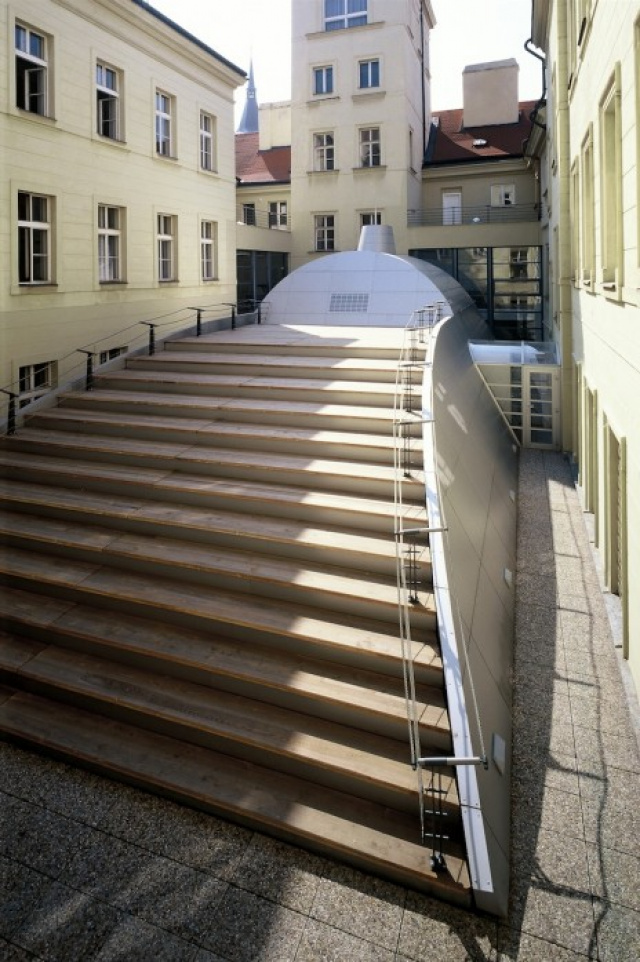 In 1998 the basement and atrium of DAMU (Academy of Performing Arts) historical building in Karlova st., Prague 1 were reconstructed. There was a theatre stage for DAMU students that could move from the spaces in Celetná in February 1999 and present themselves to the audience on their own stage that was originally created according to Karel Hubáček’s design.

As a part of the project there was a structure built in a courtyard where a kind of external stage placed on the roof of the internal theatre was created. The structure has a shape of a submarine formed by wooden stairs of an auditorium and nearly vertical bond lateral cladding supported by a reinforced concrete structure. Sipral’s delivery also included installation of warming made of TRIMO sandwich panels that water-proof enclose the building since their joints are well sealed as well as the already mentioned lateral cladding parts that were quite difficult to produce because of the proposed shape of the building. Individual parts of the warming-up and cladding were completely produced in a factory and transported to site as ready elements. The upper edge of sidewalls forms borders a railing formed by stretched stainless cables that copy the round shape of a terraced structure.

The space under the structure is hollow and serves as a shelter for technological elements of the under-stage operation of the theatre (set pieces, lightning, curtain etc.). The whole courtyard is not publicly accessible and serves only for DAMU educational purposes.