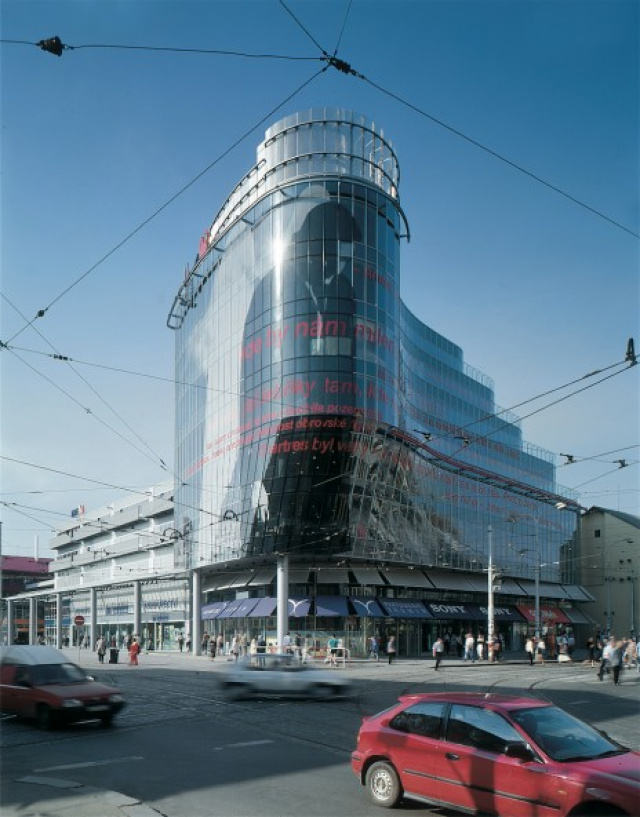 Designed by the office of French architect Jean Nouvel, the administrative and business centre Zlaty Andel in Prague-Smichov has became one of the most famous buildings in Prague in the last ten years. A large complex of buildings, formally divided into six parts, Zlaty Andel is exceptional less for its internal arrangement than, most particularly, its facade treatment. The casual viewer is quickly captivated by the image of an angel, lines of verse, or images of flowing clouds. The facades of the entire Zlaty Andel centre were made by Sipral. The technical solution chosen corresponds with the character of the individual structures. On the buildings indicated as A1, A2 and B1 the facade structures run continuously in horizontal strips, in which opening fills are interspersed with fixed glazing. Employed here is the Hartmann Systherm 72 frame system, with hidden window flaps and profiles specially extruded for this order. The non-transparent fillings between windows form insulating panels within the frame structure. Used for other opaque facade components was a thermally-insulating set-off ventilated cladding formed from a combination of lamellas and trapezoid sheets, which are manufactured by a rolling process and have a high modular precision. Deflections in the building shell had to be addressed at the time of the facade project preparation, as the combined cladding could not tolerate these deflections and would make each inaccuracy highly visible in its composition.Dominating the entire central volume is the eight-floor corner structure indicated as B2 in the complex layout, towering above the intersection known popularly as “Andel” and now a characteristic icon of the new growing part of Smichov. Realisation of its facade presented a challenge still greater than that of any other structure, as requirements for an unusually-shaped facade cladding coincided with the imposition of the image of an angle upon its surface. For this particular facade, the raster facade system Schüco SK 60V was used, with external glazing beads in both vertical and horizontal directions. Considering the geometrical complexity of the interaction between the undercut cylindrical surface of the corner with the north facade, in which bent glass units form a shape of hyperbolic paraboloids, it was necessary to design the facade cladding in 3D simulation. In co-operation with a specialised glass manufacturer, Sipral managed to design a unique solution of bending double glass units into the required shape, copying the distorted surface. In light of the requirement of maximum precision of the grid and the placement of the glass, it was necessary to survey each anchorage point and work with a tolerance of oblique section angle ± 0,1°.As an indisputable component of the aesthetic impact of the facade and the building as a whole are the graphics of clouds, poetic texts, and the angel, it was necessary to find an optimal solution for their realization. Sipral prepared five technical approaches towards graphics realisation, which were presented on facade element prototypes. Since the angle of incidence of solar rays is of particular influence on the appearance of such images, the prototypes were installed in the location of their final destination and examined from various distances for their correspondence with the technical parameters and the architectonic conception. An appropriate technology was developed by the firm Signgraphics, for which 3M Cesko provided special self-adhesive colour foils with a ten-year guarantee of durability and colour-fastness. Best in meeting guarantee requirements, appearance, price, and eventual possibility of repairs, this foil can be used on both sheet metal and glass, and does not adversely influence the requirements of transparency and interior comfort. To sum up the entire manufacturing procedure of large-scale graphics: the visual images were rendered as halftones via special computer programmes and rasterized into dots of 2–5 mm diameter. These dots were then cut with cutting plotters and glued onto glass units. In the scale of the facade as a whole, the dots of various dimensions created the required image. The total number of such dots on all the structures of Zlaty Andel reaches nearly 150 million.Particularly strict client demands concerned the thermal-technical properties of the glass units used. On all structure facades (except those facing due north) the required heat transfer coefficient value was - k = 1,4 W/m2K, light transmittance ( LT) in a range of 40–50 %, and a solar factor of maximum 0,25. These requirements substantially influenced the resulting appearance of the graphic elements. Two brands of sheet glass from two separate manufacturers were chosen: Neutral 54/27 by Luxguard for flat glazing and K Glass by Pilkington for the bent glass units. Both glass brands are commonly used on building facades in various compositions with regard to graphics application, technical questions, or safety requirements. Thanks to the graphics applied, the variety of types of glass units used, the relation to the cladding materials, and even the amount of operations and handling that preceded the installation itself, each cladding element or piece of facade cladding glass was transformed into a unique original. To stress the exacting character of constructing Zlaty Andel, it is worth noting, for example, that for the corner structure B2 it was necessary to design, manufacture, transport and place correctly 1013 glass pieces. Each glass piece bore its specific code, and its movement was monitored on Internet server. It is no exaggeration to state that Zlaty Andel’s facade cladding realisation was on the cutting edge of current technical possibilities - not only in terms of architectonic conception, but equally in the successful realisation of an original solution for graphics application on the facades and the use of distorted glass units. Without any doubt, it belongs among the most exceptional Czech buildings, and one performing excellently in any international comparison.