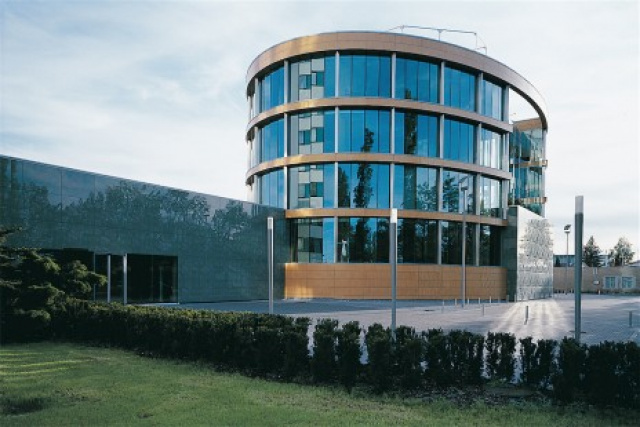 Sipral supplied the complete facade cladding for the new administrative headquarters of the Czech pharmaceutical manufacturers Leciva Praha in Horni Mecholupy. Of ellipsoidal layout, the building is connected with an older structure with a glazed communication corridor. A semi-structural facade of Schüco FW 50 S system with an inner column is combined with a cladding of high-resistant plywood. The facade glazing at the entrance part is made of Stopray Safir glass units with soft-coating. On the external facade of the glass are stylised graphics of linden-tree leaves, which form part of the Leciva Praha company logo. A technological approach developed by the company Signgraphics was used for the graphics application on glass panels, one also employed with good results on the facade of the Zlaty Andel office building in Prague. The procedure is as follows: a graphic pattern is computer-converted into half-tones with size and position determination of several-millimetre points, which are then cut and glued on glass. Used for cladding of the ellipsoidal facade of 1100 m2 area was bent exterior plywood prepared by Schauman, a Finnish company. This atypical cladding material required a special installation procedure: because the panels were bent according to the facade shape, it was not possible to cut them exactly in advance. Consequently, they were machined only on three sides were shortened to the right length only after they were affixed to the facade. Then the installation holes were drilled, set and sealed. In the course of this process, it was necessary to adjust and locate about 1600 panels.