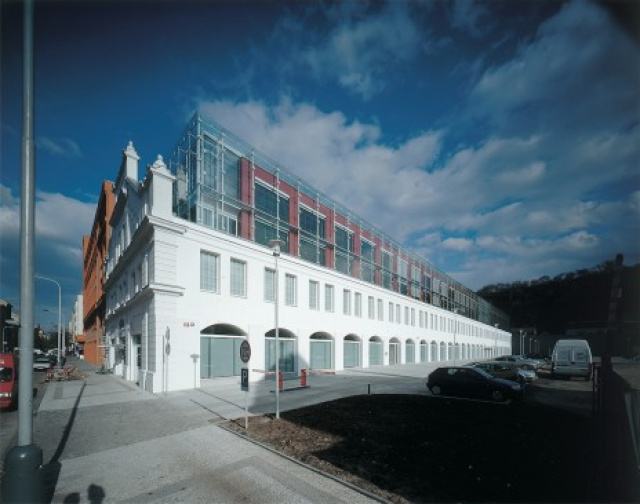 The Corso Karlin administrative building was created from reconstruction and additions to the former CKD assembly hall. The architects aimed to preserve the original classicist gable facing Krizikova street and the massive exterior masonry, while complementing it with a load-free two-floor superstructure with a double facade. It is this latter item that Sipral was entrusted with supplying. External cladding (more than 4000 m2 of glazing) is a central feature of the double facade. Serving as the basic bearing element of the cladding are point fittings, designed by Ricardo Bofill and connected with a steel pipe structure. These fixings bear 12 mm thick tempered glass units with drilled and countersunk holes. The inner facade cladding consists of inter-window pillars and fixed glazing of insulating double-glass with low reflection. The space between both facades is designed for passage through it (700 mm wide), to allow for maintenance. The double facade is equipped with electric-controlled ventilation glass louvers, which are located in its bottom parts and parapets. During summer, the overheated air is led off , ventilating the facade, while in winter the louvers are closed, leading the facade to contribute to the thermal insulation of the building and conservation of energy for heating. In the space between facades are electric-operated rollers, which enable the shading of the inner facade and cause a decrease of heat gains coming from solar radiation. The shading coefficient is variable depending on daytime and lighting intensity. Ventilation louver and shading control is connected to a central control system, which coordinates both regimes. Also, the HVAC system is an important part of the building, which reacts to changing facade qualities. In combination, all these features make the structure what is often termed an “intelligent” facade. All buildings with a double facade and a naturally ventilated inter-space form (together with active shading systems) a complex system with many variable quantities. To test this system behaviour in various conditions, Sipral developed a computer simulation model, and augmented its technical expertise in assessing the function of a double facade in the most exposed period from energetic and thermal point of view. Given the facts specified in the expert documentation, it was calculated that if we use an active shading system and louver control, then air-conditioning performance can be decreased by as much as 40% in extreme conditions. As a consequence, we can say that a properly designed double facade has generally positive influence on the total energetic balance of the building, and also ensures optimum working conditions inside. Sipral also provided the all-glass atrium and one glazed gable, the insulating double-glass of which is also designed as a point-fixed facade.