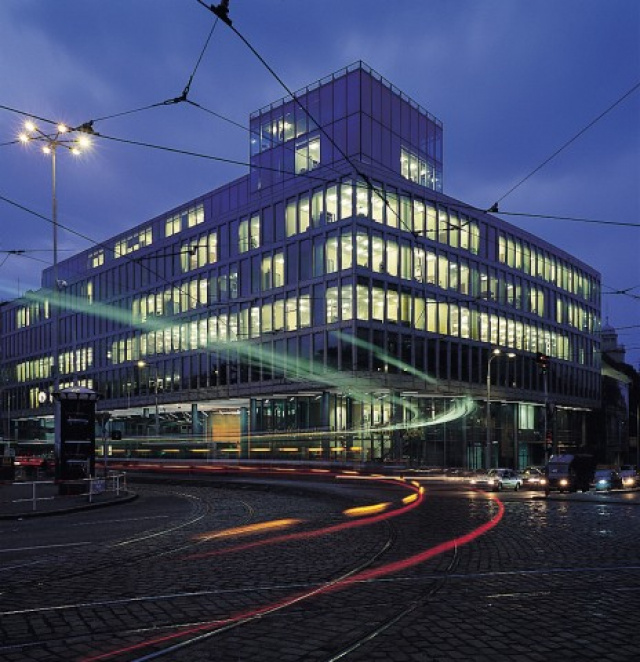 The now dominant feature on the corner of Karlovo náměstí (Charles Square) and Resslova street follows in the tradition of Prague multifunctional palaces housing office premises, retail businesses and service providers while also representing 21st century architecture in its use of applied materials. The building has a more or less rectangular ground plan, with a roof atrium occupying its centre. The wing facing Karlovo náměstí has six floors; seventh and eight floors are housed in a retreating apprentice, while a ninth floor is located in a corner tower. Retail businesses, service providers and restaurants are located on the first and second floors, while the rest of the building is devoted to office space. SIPRAL supplied complete cladding for the entire building, the atrium’s glazed roof, interior glass bridges, partition walls and glass fire-resistant structures and many other glazed structures. The facade cladding was SIPRAL’s biggest contribution to the project. The facades facing Resslova Street and Charles Square consist of two types of modular facades, the first of which has typical protruding vertical massive aluminum profiles supporting glass panes located 115 mm from the profile surface. The other type is a structural glazed facade without visible external aluminum parts. The first of these modular facades is installed on the third to sixth floors; the structural glazing was applied on the seventh and eight floors, the corner tower and most of the facade facing Resslova Street (from the second to fifth floors). The first and second floors are provided with a grid glazed Hartmann facade. The facade of the corner tower is fire-resistant. An interesting part of the façade cladding is the stone lining of the garage entrance on Resslova Street consisting of giant panels measuring 1500×1300 mm. The atrium’s roof, measuring 19x30 m, was structurally glazed with the Schüco FW 50 system. The atrium’s interior walls were constructed as structural facades but glazed with single glass panes. The second floor of the atrium is glazed with the Geze Variotec system -- a first in the Czech Republic. Individual glass sections measuring 1500×3000 mm can be folded sideward and turned 90°, allowing for fully open retail spaces in the entrance gallery. Among the other structures, it is worth mentioning all-glass stairs supported by a steel structure stretching over the entire height of the nine floors, an automatically operated all-glass door and a carousel door at the main entrance and glazed awnings measuring 7x8 m above the main entrance that are suspended from steel tie-rods attached to the roof structure on the sixth floor. The most demanding phase of the design work was the technical development of the two types of modular facades. Specific requirements related to the facades’ appearance and their static load capacity called for a special modular facade. This was a big challenge for SIPRAL, as it was the first time it developed a complete “customer-specific façade” of this size. During the design process, standard modular Hartmann façades were used; the facade profiles and sections were analyzed and then newly redesigned and manufactured specifically for this project. The pilot series of eight modules of each façade type were subjected to strict tests in an international testing laboratory in the UK. After the tests were passed, the manufacturing and installation of the two types of modular facades could get underway for the Charles Square building.