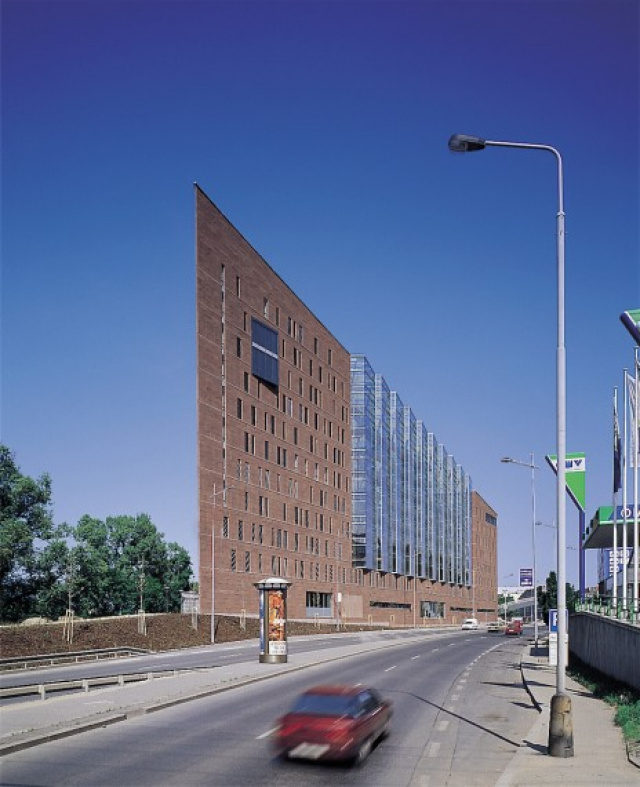 The Danube House, the new dominant feature in Prague’s Karlín district, is the first building of the River City district now under development on Rohanský Island. The building’s appearance reflects the character of this area and has been designed to catch the eye due to its location in an extremely prominent position. The building is appealing at first glance, with its pronounced triangular shape in the floor plan and cross-section, a sharp edge facing the city, facades clad with red Chinese sandstone, large glazed surfaces and non-standard window structures of a marked, vertical shape. The building’s north and east sides house office spaces connected with the main glazed facade of the monumental atrium, which is the heart of both the concept of the use of space as well as the low-energy-consumption concept of the design. For the Danube House, SIPRAL supplied all of the glazed facades, window structures, the atrium roof, internal facade of the office premises and door structures, among other things. The all-glazed facades -- the main south-west façade, the north façade and the east facade – are worth mentioning from a design point of view. All of them are based on the same construction and structural principles. The facades are suspended from a system of stainless steel tie rods that support the horizontal stainless steel T-profiles holding the glass panes. Double-glazed, highly transparent low-iron units were used to glaze all the facades. The facades are reinforced by a glass rib system that stabilizes the facades against wind load. The glass ribs serve, in fact, as supporting elements; this was the first time that such a system was applied in the Czech Republic. The main south-west façade is the most interesting part of the building’s entire cladding. It is suspended from brackets of the atrium’s main and secondary steel structures and is also supported by the system of steel platforms and stairs in the atrium. The glass ribs, which are 1 m wide and 3.5 to 9.6 m long, depending on the roof inclination, are at an angle of about 114° to the main façade surface and form an integral part of the façade. In this way, a corrugated glazed surface 70 m in length and approximately 35 m high protrudes conspicuously from the adjoining sandstone cladding. In the north and east facades, the glass ribs protrude at a right angle to the interior. The most difficult part of the project was to ensure that the specific parts of the main façade’s structure were able to adapt to changes in temperature. This task was made even more difficult by the fact that the individual parts of the façade were made of different materials. In response to this challenge, SIPRAL developed and manufactured a complex system of fixed and movable joints. Another difficult task in terms of assembly and manufacturing was to meet the required precision for the stainless steel and glass façade elements attached directly to the non-standard steel structure joints. As the façade was suspended from flexible brackets, a special preloading system was applied so as to bend the brackets and elongate the tie rods in order to fix them at their final locations. All of the elements were measured with specially developed measuring fixtures and adjusted in several subsequent cycles. After being adjusted, the structure was then glazed. For this purpose, SIPRAL developed a dedicated patented system that, among other things, allowed for drilling bores simultaneously into the glass ribs and supporting structure at the construction site. Other parts worth mentioning are the atrium’s glazed roof made of Schüco FW 60+ standard profiles attached to the roof’s secondary supporting structure. Another stylish element is the interior façade separating the atrium from the office premises. This façade consists of the Schüco FW 50+ system, which has the same color as the outside window profiles. What is interesting about this façade is that sound-insulation sheets were used as façade panels. A large part of SIPRAL’s contribution involved the installation of all of the window structures, which were manufactured of the Schüco Royal S 70 aluminum system and coated with a black-grey baked varnish. The window structures are sealed circumferentially with a heat-insulating material and waterproof foil. The windows are equipped with external motor-operated horizontal blinds connected to a central control system. The mechanism, including a box housing the blinds, is hidden under the façade cladding. The windows of each facade are glazed with glass of varying parameters depending on the facade orientation so as to allow for optimal energy consumption throughout the building.