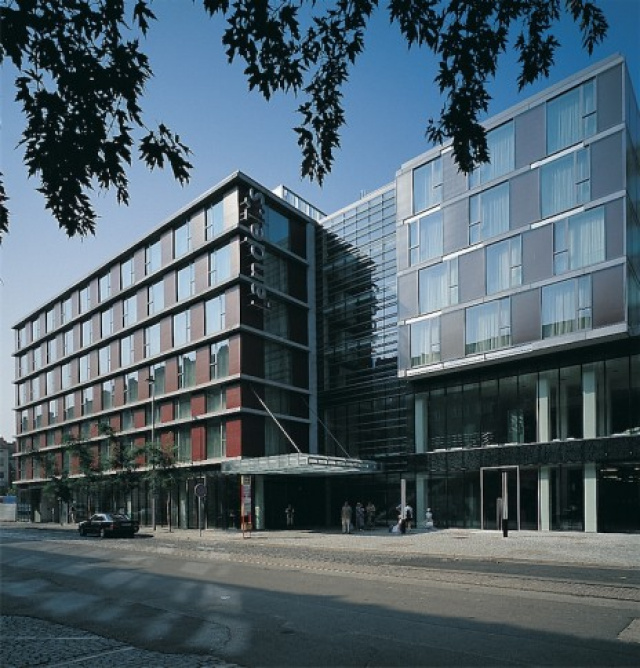 The Anděl Hotel, which consists of three six-storey buildings, occupies an attractive position within the Nový Smíchov block now under development.For the hotel’s construction, SIPRAL supplied a complete facade cladding, window structures and other glazed components, including a steel-and-glass awning above the main entrance, two automatically operated main entrance doors, an automatic door leading into a corridor, the west façade's window structures, structural glazing for part of the four-storey atrium over the corridor and a copilite structure on the building’s roof. The parterres on the first and second floors of the first of the two buildings, when viewed from Plzeňská Street, are made of the Schüco FW 50+ all-glass system.The window-sill and head-jamb belts in the parterre are clad with glass panels covered with screen-printed pictures.The same glazing has been used in the Domino gallery located between the two buildings.The facades on the third to sixth floors are made of framed window structures that were manufactured and glazed and then delivered to the building site, where they were installed into specially prepared openings.The surfaces in-between consist of heat-insulating ‘sandwich’ panels whose front side is covered with Crepi pattern ornamental glass underlayed with a dark red sheet. Thanks to the placement of the ornamental glass, the shade of the red sheet changes depending on the viewing angle, giving the façade a vivid and varying appearance.At the level of the ceiling slabs, the facades of the third to sixth floors are horizontally divided by line-forming glass-concrete panels. The hotel’s third building has a one-storey parterre whose façade resembles that of the adjoining building. The panels between the windows are made of Parklex, a pressed, water-resistant veneered plywood.The moldings between the floors are made differently, protruding from the facade and dividing it into horizontal sections. The most interesting part of the hotel’s construction – and also the most difficult part to manufacture – was the Crystal Room outdoor pavilion at the corner of the first building. Given the subsequent glass installation, the pavilion’s steel ribs had to precisely be fixed to a concrete slab (at a precision of 5 mm) supported at a height of about 3 m; the slab’s inclined feet were made so as to seem unstable. The pavilion’s external cladding is made of laminated hardened glass screen-printed with the pattern used on the other facades. The glass panels of the cladding of the pavilion’s north and south sides are fixed to steel brackets welded to steel ribs.The glass panels of the east and west sides are fastened with fixing disks.The connecting neck between the pavilion and the hotel is built of clear glass walls and the roof of Crepi ornamental glass. Given the limited space and large size of the glass panels, the installation of the connecting neck was the most difficult phase in constructing the pavilion and the entire Anděl hotel.