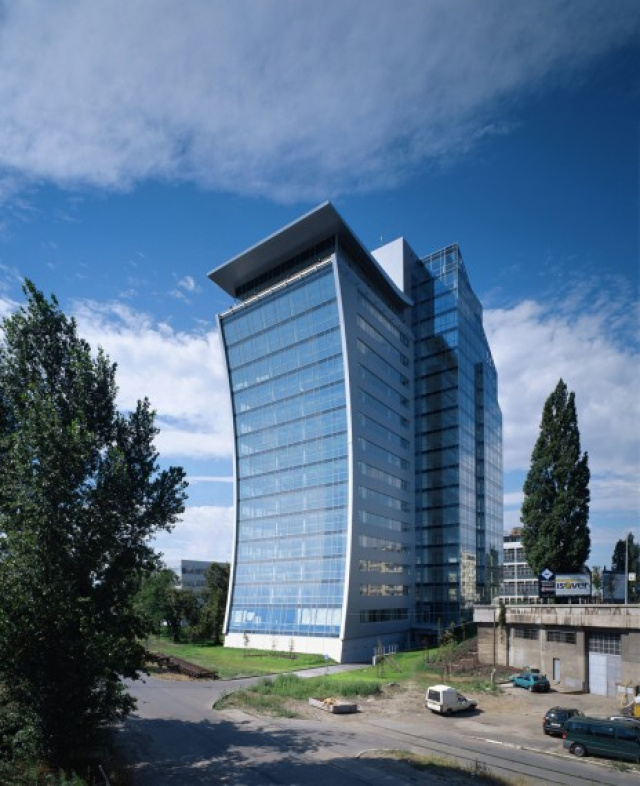 The Lighthouse complex of office buildings is located on the left bank of the Vltava River not far from Libeňský Bridge. Along with a high-rise building constructed between 1974-77 and once occupied by the Kovo foreign-trade company, it forms a dominant feature at the gateway to Holešovice and the vast area of the Libeň port, which is undergoing extensive development Sipral supplied the cladding for the entire complex, which includes two connected towers (A1 and A2) and a four-storey substructure (B). All of the buildings are connected by a four-storey underground parking garage. The parking garage compensates for the slope of the terrain, which is inclined in the direction of the river and - at the same time – forms an integral part of the building’s anti-flood system. The supporting structure of all three parts of the building is made of a monolithic reinforced concrete skeleton. The more intricately shaped parts of the towers are equipped with pre-stressed ceilings and columns. The façades of the two towers were required to meet strict requirements as to the technical design, manufacturing and assembly. The A1 tower has a glazed façade with floors that diagonally retreat inwards in the upper part and which resembles fish scales. The stand-off of the scales ranges from 25 cm to 90 cm and forms small terraces on specific parts of the façade. The A2 tower has a parabolically curved east façade. Its south and north facades consist of ribbon windows combined with aluminum strip cladding. The towers were clad with modules manufactured from customized Schüco profiles. The parts with ribbon windows and the B building were clad with a Schüco RS65 frame system. The floors on the roof of the A2 tower, which retract inwards, are clad with a Schüco FW50 grid façade. The cladding is finished with a steel structure that projects from the roof over the edge of the curved façade by 3 meters and which is covered with composite panels. From a technical point of view, the floors of the A1 tower, which retreat inward along its entire height, was the most demanding task. For this purpose, double modules glazed with two double-glazing units were used. Single glazing is used on these modules on the terraces and serve as guards. The upper parts of the attic modules accommodate fixtures that cast light on the diagonal lines of the scales at night. Sipral supplied storefronts, internal sill lining and all the interior shading structures for this project.