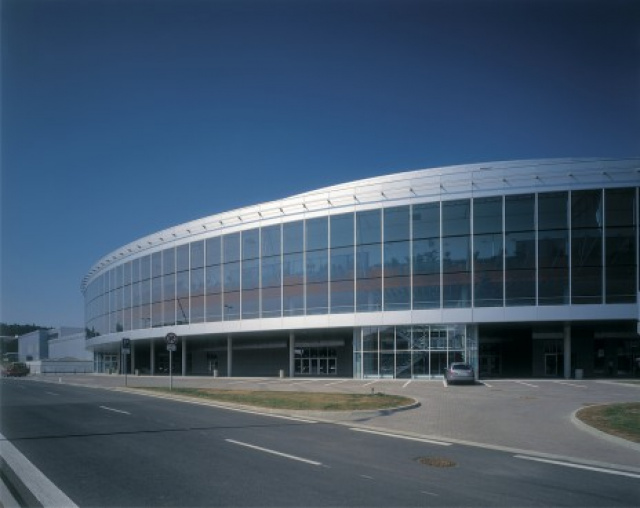 The Sazka Arena, site of the 2004 World Ice Hockey Championships, is the first building within the Zelený ostrov Entertainment and Commercial center that is planned for construction on a 16ha site in Prague’s Vysočany quarter. The project – from design to completion – was completed over a short period of time and was closely watched by the general public. Sipral served as a general supplier of the cladding for this prestigious project, which won the Stavba roku 2003 (The 2003 Building of the Year) award.The Sazka Arena consists of the Big Arena and Small Arena with a combined volume of 900,000 m3 and an 18,000 seat capacity. The Big Arena consists of a seven-storey reinforced, circular concrete skeleton. The structure of the arena’s roof has won awards for its unique features, including a spherical-cap dome 135 meters in diameter and 9.3 meters in deflection. The roof’s supporting structure consists of a radial truss and tie rod system (with a total of 36 spokes) connected to a central circular tube. The Small Arena, which houses a training ice rink and which provided necessary operating spaces for the championship, is orthogonally-shaped, partly embedded in the ground and consists of a four-storey reinforced concrete skeleton that is equipped with a cylindrical roof 36 meters in span, 61 meters long and 7.35 meters in deflection.All of the structures delivered by the subcontractors were optimized at the construction site so as to minimize assembly time. As a result, Sipral recommended that the 11.5 meter high external cladding of the Big Arena’s polygonal ring take the form of a modular façade with two rows of large modules suspended from an upper steel supporting structure. The larger modules are 6.5 x 2.25 meters and weigh 550 kg; the smaller modules weigh about 300 kilograms and measure 4.5 x 2.25 meters. The assembly was carried out in reverse order – when a lower module was attached an upper one was installed. Both modules were joined and aligned. Afterwards, the lower module was disconnected from the steel structure to allow both rows to dilate together.The external cladding ring consists of 420 modules. Due to their large size, the assembly had to be performed about 100 meters away from the construction site in an old factory hall that Sipral rented for this purpose. This solution offered many advantages, as the space could be used as a storage hall that avoided the need to transport components by truck across Prague during rush hour. It also served as a good on-site temporary facility and spaces for personnel. Although the project was operating under a strict timeframe, the assembly of the cladding continued smoothly and remained on schedule. Installation of the ring modules began in August 2003 and the entire building was clad in November 2003.Sipral also supplied grid facades and escape stairways, including the south arched façade at the entrance, all façade stone linings and extensive surface areas with Alucobond lining, attics and suspended ceilings of both buildings. Also part of the delivery were 130 entry and escape doors, of which 100 are located at the bottom part of the ring. The height of these doors had to be adjusted with extreme precision. From a technical point of view, the glazed steel structure cladding of the Small Arena’s cylindrical roof – with a total area of 2,500m2 -- was interesting. The glazing was made of clear and enameled glass panes in 2.25x1.25 meter rhomboidal flat segments. The Small Arena’s modular facades were made of Hueck custom-made profiles, and the other facades were fabricated from Schüco system profiles.