Fabrication and logistics centre is located 8 km eastwards from Prague, in close proximity to D11. Its construction started in 2006, when the company decided to enlarge its fabrication premises and move a substantial part of fabrication devices and material stock from hired premises.

In the beginning of 2008 the centre was completed and since the middle of the same year the fabrication started to run to the fullest.

In 2014 we started to feel we would need larger fabrication and stock areas. It was decided to extend the current hall. In the beginning of January 2016 brand new premises for fabrication and assembly were opened.  At present time they are stretched over 30.200 m2.

The new part of the hall has the area of 2500 m2 and the whole building will be used for fabrication. The machining centre was enlarged along the whole length of the back wall and three new assembly “naves” D, E and F. Now the variable assembly system is zoned in six parts (together with the already existing A, B, C), out of which each provides approximately 756 m2 of assembly area.

The fabrication centre is stretched over 8300 m2 out of which 11,2 % is aimed for its administrative background. The capacity is dimensioned for 200 workers in a three-shift operation and fabrication of up to 150.000 m2 of element facades per year.

Stock premises of the centre in Jirny are equipped with modern large capacity automated racking system of profile storage and automated system to store small material and accessories. The plant disposes of modern machining centers Handtmann and Elumatec.  We also use Brother to fabricate small parts as well as several saws and other multi-function machines. 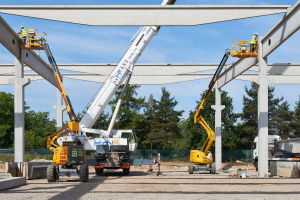 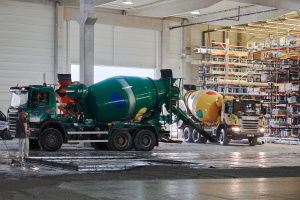